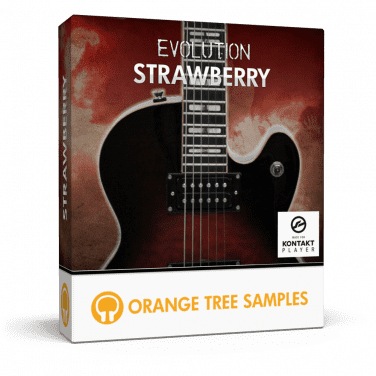 Evolution Strawberry enables keyboardists to easily and quickly create authentic sounding electric guitar parts without the need to hand edit MIDI. Unlike conventional high-end KONTAKT guitar sample libraries and guitar VSTs, Evolution doesn’t require keyboardists to possess a foundational understanding of how to play the guitar in order to achieve authentic results. Instead, it leverages your existing keyboard skills, translating these techniques for the guitar, much like a skilled language interpretor translates one language into another. For example, chord inversions are automatically analyzed and the appropriate guitar chord voicing is instantly determined. Strummed guitar chord options are only limited by your imagination — whether it’s power chords, triads, augmented chords, diminished chords, suspended fourths, 7ths, 9ths, 11ths,
Evolution utilizes sophisticated scripting instead of requiring you to memorize dozens of keyswitches and contains extensive articulations, from palm mutes to pinch harmonics, accurately simulating a real life guitar performance. It features the detail and nuances that bring a guitar performance to life. Its proprietary string resonation engine creates a sense of organic realism unparalleled by other guitar sample libraries or VSTs. Even more, Evolution, doesn’t require you to compromise your playing or sequencing workflow in order to adapt to its way of working — instead, it uses a convenient mapping system, so that the sample library mapping can be quickly and easily customized to your personal preference.
Evolution covers rhythm and lead guitar playing — which includes Orange Tree Samples powerful and advanced, yet easy to use, chord strumming functionality. The strumming system automates the time consuming task of sequencing realistic rhythm guitar parts, including an intelligent chord detection engine, which instantly translates chords on the keyboard into guitar voicings on the fretboard. Popular studio techniques like double tracking (and triple and quadruple tracking) are performed with the turn of a knob. Want to detune or capo the guitar? It’s all easily done, and switching to alternate tunings not only affect the range of the instrument, but change the tone of the individual strings. To provide the greatest versatility, Evolution was recorded dry and includes an assortment of virtual stompbox effects, and a vast array of guitar cabinet impulses, all built directly into the sample library. That way users can choose their favorite select amp simulation and effects to attain just the right sound, from pop to rock to funk to hip hop to jazz right out of the box.
Features: